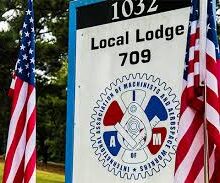 We are the Union that represents the Office & Technical and Factory employees of Lockheed Martin at Air Force Plant #6 and in Marietta, Georgia. We currently have approximately 3000 members who build the most advanced aircraft flying, which includes the F-22, JSF, C-130J, P-3 wings and the C-5 Mod.

THE HISTORY OF OUR LOCAL LODGE

Early in 1951, the California based Lockheed Corporation leased from the U. S. Government Air Force Plant No. 6 in Marietta, Georgia, resulting in the formation of the Georgia Division of the Lockheed Corporation. Serving at that time as General Manager was J. V. Carmichael. There was an understanding between the parent company in California and the Machinists International whereby the I.A.M. would represent employees at the new facility. A Labor Agreement was executed by the parties and implemented at the Georgia Division. The International, through its representatives (Brothers Chuck Jones, Grand Lodge Representative and M. T. Gamel, Special Representative) appointed Brother Tom Bates to be the first President of what became District Lodge 33. In the beginning there was only one ledge: namely Lodge 1996. Following Brother Bates’ appointment by the Grand Lodge, Brother Tommy Studstill was elected as President of Lodge 1996. Shortly thereafter, under the leadership of the International District Lodge 33 was established. Five Local Lodges were encompassed under District Lodge 33. They were Lodges 1996, 1970, 913, 615 and 2016, representing Factory Day Shift, Factory Swing Shift, Office and Technical, Guards and a separate lodge for black employees.

The matter of jurisdiction by the I.A.M. at the Marietta Plant was subject to later challenge by the C.I.O., a rival union of the A.F.L. to which the Machinists were affiliated.

In order to conduct business and begin a more effective organizing campaign, the I.A.M. set up temporary offices in a house located at the corner of Fairground and Roswell Streets.

In 1952, as the Georgia employment grew, the efforts by the C.I.O. to call for an election did materialize under the supervision of the N.L.R.B. The results were favorable to the I.A.M. becoming the accepted bargaining representative for the hourly-represented employees at the Georgia Facility.

Shortly thereafter, District 33 moved to a new address on Waverly Way. This large two-story construction had formerly been the Elks Club.

Brother Hubert Gammon was elected President in December 1953 and took office January 1954. Brother W. E. (Bill) Headrick assumed the Presidency in late 1954. It was under his administration and together with many dedicated Union members (too many to enumerate at this time) that property was acquired and zoned for building a new Union Hall in a permissible future. That real estate is the property where our Union Hall stands today on Clay Street.

During the 1955 Contract negotiations, a separate seniority for the Georgia plant employees was first established. At this time, retreat rights to jobs previously held at the Georgia Division and seniority rights within the classification were obtained.

Brother H. B. Savage, Sr. was elected to succeed Brother Headrick and served until January 1958.

Around this time and at the national level, the two most powerful labor organizations in the United States merged creating g the AFL-CIO. Later the Machinist Union changed its name to International Association of Machinists and Aerospace Workers, affiliated with the AFL-CIO.

During the med fifties, the employment at Lockheed-Georgia continued its growth and so did our membership. At that time one of the most discussed topics was the unfounded rumor that the Union could not legally strike on government property such as the Air Force Plant No. 6.

In 1958, Brother Ernie Demcheck was elected as President of District 33. Because of a Contract proposal offered by the Company, which our members were not able to accept, the I.A.M. at Lockheed-Georgia went on strike in May of that year. That work stoppage lasted for a few days, until the new proposal was approved by the membership. It was then that our property on Clay Street was used for the first time by setting up tents, food supplies, etc. to assist our striking brothers and sisters.

After this event, the Southern Technical Institute was considering building an educational facility next to our Clay Street property. While under the direction of the Grand Lodge, less than one acre of our property was donated to assist Southern Tech in the development of its campus.

A very damaging fire destroyed the Waverly Way property, which forced District 33 to set up temporary offices at a location that had been known as the Bell Theater, which stood across the street from what is today the Civic Center. Construction then began on our new Union Hall.

Brother Ernie Demcheck remained as President of District 33 when the new edifice at Clay Street was placed into use. This was a single-story structure building, and most of the frontage still is preserved today, consisting of business offices, executive offices, finance offices and a meeting hall with a capacity of approximately 200 people.

Along about this time, by a disposition of the Grand Lodge, all Local Lodges under District 33, with the exception of the Guard Lodge 615, were merged into one Lodge on September 9, 1961, and the Aeronautical Machinists Lodge 709 was chartered on September 26, 1961, to represent the workers, other than the Guards, at the Georgia Division.

Brother Clyde Williams was elected as the first President of Local Lodge 709 and served until January 1966. Brother Harold Vaughan was then elected to succeed Brother Williams.

In December 1967, a Business Representative by the name of Reeves Bowen, Jr., was elected and assumed office as President in January 1968. During his tenure, we experienced a radical change that brought back the needed unity and integrity of our Union. Our treasury became solvent and positive innovations were implemented during this reconstruction period. Our building was expanded and the construction of the new Auditorium and was accomplished.

Early in the 1970-s, the Lockheed Corporation began having financial difficulties. Among many of its problems was the cancellation of the C-5 production at a time when only 50% of the order was delivered to the U. S. Air Force. The Lockheed problem became so acute that the Corporation was forced to request from the government a loan for $250,000,000.00. This figure was essential to secure the entire Corporation existence.

Our Local 709, simultaneously with many other Lockheed Unions, went all out in support of Lockheed. At one point of this struggle, it appeared to be a lost cause. However, because of the many efforts, including an effective lobbying campaign directed by the International, the deciding vote needed on the floor of the Senate was finally obtained providing Lockheed with the needed backing. The Company was able to repay this loan expeditiously and before the due date – an event that we all share with pride. If it were not for the members of the IAMAW, the future of Lockheed could not have survived.

In 1977, the negotiations did not run very smoothly. It was obvious that the Company was attempting to erode our seniority system as well as many other benefits. The desire of the Company to create a “work-stoppage” became evident. On October 19, 1977, the Union was forced to set up picket lines after the membership of Local Lodge 709 rejected the final Company proposal. This strike lasted until the end of that year. The unity and strength displayed by our brothers and sisters during this turbulent period signaled the Company the absolute need to offer a proposal that would meet our membership’s approval.

Brother Bowen remained President until his tragic death on July 16, 1987. He had served the membership a total of nineteen years, 7 months. Brother Johnny Wall, who was Vice President, assumed the Presidency of Local Lodge 709.